As of 1 January this year, 24 of the 35 LIBOR interest rate benchmarks or ‘settings’ are no longer published.
What does this mean for groups which still have intercompany loan agreements, loan notes, or cash pooling arrangements that refer to LIBOR?

On the face of it, it’s very simple: select an alternative risk-free rate and update the legal documents accordingly.

But this only helps if the original arrangements worked, to begin with. An analogy would be to replace the cracked windscreen of a car with no brakes. The car might look better, but you still wouldn’t want to drive it.

A recent Court judgment offers a compelling example. ATO’s victory in its transfer pricing litigation involving Singapore Telecom Australia shows the fundamental role which legal documentation plays in the pricing of intercompany loans. It is also a reminder of how important it is to clearly articulate and record the commercial rationale for implementing or modifying arrangements involving intercompany financing.

This blog post sets out some of the background to that case, and suggests some takeaways for documenting and revising intercompany loans – including in response to the end of LIBOR.

On 17 December 2021, the Federal Court of Appeals in Australia ruled in favour of the ATO in a dispute relating to intercompany debt totalling AUD 5.2 billion. The Australian Tax Commissioner contested tax deductions claimed by Singapore Telecom Australia Investments Pty Ltd (STAI) for interest paid on the debt in the tax years ending March 31, 2010, 2011, 2012, and 2013, on the basis of the applicable transfer pricing provisions.

The Court upheld the Commissioner’s assessments, resulting in the increased taxable income of just under AUD 895 million (approx. USD 640 million). The group later said that the resulting net tax exposure and related interest and penalties amounted to AUD 304 million.

The loan notes were issued by STAI as borrower. The holder of the loan notes was Singtel Australia Investment Ltd (SAI), a company incorporated in the British Virgin Islands and resident in Singapore. Both companies were wholly owned subsidiaries of Singapore Telecom.

Prior to the issuance of the loan notes, SAI had acquired a company called Cable & Wireless Optus Ltd. That company’s name was later changed to Singtel Optus Ltd (SOPL). As part of an intragroup reorganization, STAI subsequently acquired the shares of SOPL from SAI, in consideration for the issuance of shares and the AUD 5.2 billion loan notes mentioned above.

The group structure following that acquisition is shown in the diagram below. 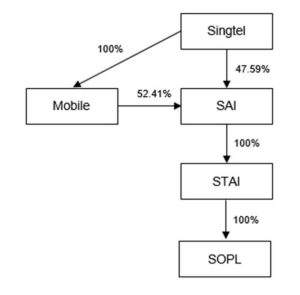 One distinctive feature of the case was that the terms of the loan notes and the Loan Note Issuance Agreement evolved over time. This evolution can be summarised as follows.

Interest accrues at a floating rate calculated as the one-year Bank Bill Swap Rate (BBSW) plus 1%. The holder may require the loan notes to be redeemed at any time.

Expressed to have effect from the original date of issue. No change to the interest rate. The maturity date for the loan notes is extended to the tenth anniversary of the issue date less one day, as opposed to the notes being repayable on demand.

Expressed to have effect from the original date of issue. Interest-free period of approximately 3.5 years (i.e. the period from 28 June 2002 to 31 December 2005). Interest thereafter is increased to the one-year BBSW plus 1% and an additional premium of 4.552%. Accrual and payment of interest is contingent upon certain ‘benchmarks’ being achieved, relating to profits before tax and free cashflow.

The issues considered by the Court included:

The Court seems to have been particularly struck by the absence of convincing evidence of a tenable commercial rationale for the changes in the terms of the loan notes over time, particularly in the second and third amendments. The decision contains extensive commentary that attempts to reconstruct the reasons for the changes, including reviewing extracts from emails. One has to assume that the group did not have a practice of creating briefing notes for the directors of the two legal entities involved (STAI and SAI), explaining the documents which they were being asked to approve.

It is also notable that the loan notes in their original form provided for the debt of AUD 5.2 billion to be repayable on demand. Given that the borrower, STAI, appears to have no significant assets other than a (presumably illiquid) investment in Singtel Optus Ltd, it is hard to see how STAI’s directors could have properly approved such a financing arrangement. This is not just a transfer pricing issue, of course: it raises questions as to whether STAI’s statutory accounts could properly be prepared on a going concern basis, and exposes STAI’s directors to risks of personal liability.

We’ll leave it to others to comment on the economic analysis from a transfer pricing perspective. For example, this very helpful article by Dr Harold McClure which appeared in MNE Tax.

From a practical perspective in terms of record-keeping, it is worth noting that the Australian Tax Commission seemingly did not issue determinations as regards the disputed interest deductions until October 2016. That is over 7 years after the third amendment to the loan notes. This underlines how challenging it is for groups, when they modify their intercompany transactions, to create and retain evidence of the decision-making and approval process.

For more information on the decision, see the case report.

Key takeaways for taxpayers and their advisers

The following comments do not only apply to groups that need to review their intercompany loans as a result of the withdrawal of LIBOR. They are relevant in any scenario that involves the implementation or variation of intercompany financing arrangements.

Two things stand out in particular.

First, as noted by Dr McClure in the article we linked to above:

Therefore, as with every other intercompany transaction type, the legal implementation of financial transactions is the foundation for the TP analysis, and cannot be treated as an afterthought.

Second, in addition to documenting the terms of intercompany financing arrangements, it is essential to record the governance process by which the relevant arrangements (or variations) were approved. This includes explaining the commercial rationale from the perspectives of each of the participating entities. The Singtel Telecom Australia case shows that the more complex or unusual the financing arrangements are, the more important this becomes.

All in all, the withdrawal of LIBOR creates a small problem that’s easy to fix and highlights a much bigger one that’s considerably more challenging. The small problem is reviewing and updating a group’s intercompany loan agreements. But dealing with that won’t help much if the bigger issue remains unresolved: ensuring that the group’s transfer pricing policies are legally implemented in practice and that the group can provide documentation to demonstrate this if required.

PS If you think that you’ll need to review any intercompany loans in the near future, you might want to take a look at LCN Legal’s checklist of considerations. It is available free from our website. Checklists and resources of this nature can always be improved, so we would welcome any comments or suggestions you may have.﻿